A recent report published by the Institute of Advanced Drivers analysed the contributory factors in hundreds and thousands serious accidents which occurred since 2005, the first year that contributory factors in accidents were recorded. Failing to look properly is, by far the most likely factor in an accident. Surprisingly, exceeding the speed limit is not the main cause of all traffic accident, figuring in just 5.2%. Those who would like to view this document may click here…

No doubt organisations interested in reducing road deaths will be analysing the figures in depth. During the millions of miles I have travelled by car, the few times I have been hit have been due to poor observation on the part of the other driver. On one occasion the driver, who had been following me for several minutes before hitting the rear of my car declared “Where did you come from?”

In October 2004 and in earlier blogs I commented on the perceived view that speed cameras save lives. I stated that this was contrary to the evidence which showed an increase in the number of pedestrians injured or killed co-incident with the introduction of cameras. I have been infuriated by officials who seem blind to this fact. Do these people hold driving licenses?

If you scroll down to my blog October 2010 “The End of the War on Motorists” you would see that I confidently predicted a reduction in road deaths when cameras were switched off. I was correct. Figures released this month show a reduction of 14% in road deaths between July and September 2010 bringing the total carnage in the twelve months before September to below 2,000. – the lowest since records began!

This is pretty conclusive evidence that cameras have been installed at inappropriate sites, presumably to generate revenue.

Progress – of a sort

This picture appeared in my Blog August 2010. – the 1934 futuristic looking Tatra with a Cd of 0.20. The shape was dictated to allow a high cruising speed.

70 years later we have reduced the Cd by just 0.01. I am keeping my fingers crossed that when the car makes production the engineers prevail over the designer duckies. Adding drag inducing ‘design features’ would make the car look like a tart at a wrestling match

This crotch crusher has elevated the voice of many a post pubescent male over the years as they walk back from the pub on a moonless night. There is no street lighting and the area can be quite foggy during autumn nights. It may have been put there to stop drivers driving along the footpath and ending up in the pond but being all on its lonesome this black lump of metal is as effective as blind goalie. A driver intent in dunking his car could drive round it. Perhaps the Council could paint it white or remove it altogether? 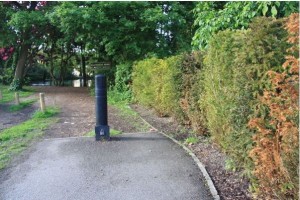 The following signs were found in Reading. I think that there must have been a “Buy one, get one free” offer on at the time of installation. 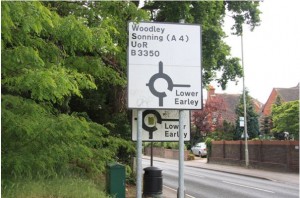 During the last month I noticed a plethora of ‘bollards’ having been planted along the roadside. Being ugly lumps of metal the Council have decided to disguise them by painting them black. I believe that this one is to prevent drivers parking on the kerb. 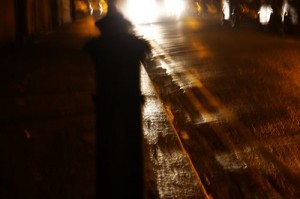 Since about 25% of all driving fatalities are caused by collisions with street furniture, such as these ‘bollards’, I am at a loss as to why they have been allowed to proliferate, let alone be painted in camouflage colours. These ‘bollards’ found on the Broadmoor estate are far safer. They are covered in two colour retro-reflective film and have LED marker lights to make them even more visible. 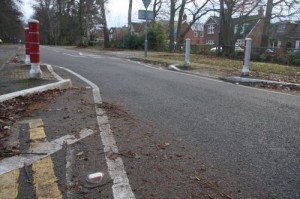 Naturally these safer ‘bollards’ will cost more but if cost cutting is an issue, why are ‘bollards’ put up everywhere? No doubt when accident statistics reveal the folly of these ugly black lumps being set in the roadside then they will be removed.