What an expensive month! The car needed a replacement gearbox and clutch, front brakes were replaced, I had a few minor body repairs done and I miss-fuelled with petrol. Almost three grand down the tube. I will be working for the minimum wage for some time to come until my credit cards are paid off! Despite the costs, I love my car to bits. She always has plenty in reserve no matter what I ask of her. She is economical when driven with restraint but so fantastic when pushed.

Watchdog shows motorists to be an easy touch.

Private Parking Companies have been the focus of attention in this weeks’ BBC 1 Watchdog documentary. Anne Robinson scored a knock-out when interviewing heads of bodies ‘monitoring’ this band of rogues. The majority of us just pay up when issued with a questionable fine. I myself was forced to do so when the cost of complaining proved prohibitive (See Ealing Comedies Jan,09). Others do not roll over so easily despite the system favouring the issuers of the fines. Those guys know how to play the system. That is their raison d’etre. However my hat goes off for the lady who was issued a parking fine for letting her husband out of the car in a traffic hold up. She beat the system and had the parking fine revoked. If time were money she would still be out of pocket but it does prove that the little guy can successfully take on the big guys. Something rather British about that.

Have you noticed how every little cul-de-sac now has a 20mph speed limit at its entrance? Do we really need to be told that 30 mph is not the best speed when driving down a short cluttered road? These road signs are ugly, expensive and an insult to our intelligence. See my blog Cheap Office Supplies? (Apr’10) Seen we will be getting signs telling us to brake!

I drove to Essex yesterday and attempted the best fuel economy possible. The average for the 1.5 hour journey was over 70mpg. Returning I got caught in traffic due to the M25 being closed. The 2 hour journey returned me only 56mpg. Clogged roads cost us a fortune and increase our carbon emissions! 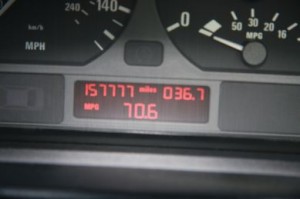