Emission devices have to be fitted to current internal combustion engines to reduce the concentration of nitrogen compounds in exhaust gases.  These chemicals are blamed for chest infections.

Early this year saw a high level of coughs. You only had to listen to live radio or television programs for this evidence – radio 4, a talk station had a significant background noise of people in the studio trying to stifle coughs.

The weather at the time was moist – most days had drizzly rain falling – the pavements were rarely dry.  Now oxides of nitrogen are very soluble.  Levels of these compounds in the atmosphere were low.

The last months have seen a reversal of these conditions.  Persistent high pressure has brought hot weather – sun and still air.  Ideal conditions for the build up of nitrogen oxides, one would have thought.   We would expect, according to the theory that these compounds would currently be causing chesty coughs.  This is not the case.  The question therefore is, “Are nitrogen emissions generated by motor transport significantly bad for our health?”

Arguments for emissions controls can be found here – http://www.epa.gov/ttn/catc/dir1/fnoxdoc.pdf   It has the backing of the Canadian Government but glosses over the origin of the gas in the first place.  Their maps show air flowing from the direction of the magnetic pole.  That area attracts solar particles from the sun which ionises the air producing the Aurora Borealis.  Ionisation also produces oxides of nitrogen. 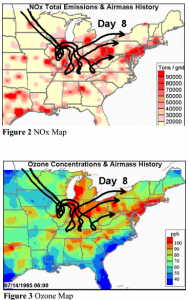 My opinion based on this evidence is that current emissions regulations are having a harmful effect on our atmosphere by increasing global warming, but do not significantly improve our health.