The combustion engine is a compromise.

Twenty years ago great promises were made by the ‘Adiabatic Engine’ which would have been so fuel efficient that it would not have needed a cooling system.  About that time ‘lean burn technology’ was being developed for petrol engines. If those technologies were allowed to develop then 100mpg would now be the norm.  This would have slowed global warming and given us a little more time to persuade politicians that they should act on the problem.

Now the oxides of nitrogen are produced in nature and are found in higher concentrations over areas which have a propensity for lightning activity, such as over our remaining rain forests.   The oxides of nitrogen get washed into the soil and are recycled by the plants to produce protein.

The Environmentalists band wagon decided that nitrous oxide in towns is very bad since under certain weather conditions it can form a photochromic fog which is unpleasant.  Most of the time the wind will blow the nitrogen oxides away where it will quickly get washed into the soil.

Surely it is not beyond the wit of man to have the software on the car to switch on the devices which reduce nitrogen oxide emissions every time the  vehicle is in or around a town, and revert to the state which reduces carbon emissions when driven elsewhere?

Just having the software operate to reduce nitrogen emissions during testing yet reducing carbon emissions at other times is a step too far!

The public must be protected from rogue operators when they want a car to pick them up. Taxis advertise that they are taxis and advertise when they are available for hire. Private hire vehicles must be booked in advance via a registered operator, carry only limited advertising and cannot be hailed or tout for business. Both types of businesses are controlled by a local authority to ensure that a safe service is provided to the public. Both operators have specific insurance covering the passengers, the vehicles must be maintained to a high standard and the drivers must perform a good service. Some operators are both private hire and taxi companies.

Technology is blurring the difference between taxis and private hire. In the past a telephone call from a venue or a phone box could be used to call a private hire car or a taxi. A taxi could also be hailed but it would be illegal for a private hire car to stop if hailed. Smart phone aps using GPS linked to a data base of GPS enabled private cars allow these companies step into the shoes of the taxis. Some aps even allow the customers to rate the driver in the same way that Check-a-trade rates services.

I would be happy for either to take me to give me a lift. Does the public care? I think not.

The cheapest lithium rechargeable cells at the moment are 18650 size, somewhat larger than AA cells. Since lithium batteries have about twice the voltage, the size difference prevents lithium cells being put into equipment designed for nominal 1.5V cells.

A recent laboratory developments has been the incorporation of voids in the lithium anode. These cells expand slightly as they charge and this may some lithium to leave the electrode. The incorporation of pores into the electrode allows the components to expand into the voids rather than breaking free. This will allow for quicker charging, a longer life and a higher capacity.

Battery technology seems to be following a version of ‘Moore’s Law’ in that capacity is doubling every five years or less – and of course the price of lithium batteries is coming down. I estimate that in five years the Tesla S will have a range of 600miles (up from the current 300) which will make electric cars very cost-effective.

A great deal of technology has gone into reciprocating car engines and there will be a great deal of resistance for manufacturers to abandon the internal combustion motor. I remember how long the old contact breaker points in distributors soldiered on in the face of solid state switching. No doubt legislation will hasten the adoption of electric vehicles as towns and cities ban polluting vehicles from their centres. 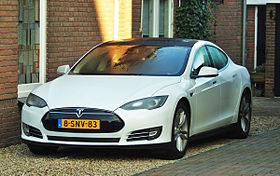 The Tesla model S.  Changing the fuse, connectors and inverter allowed this model to reach 60mph in 2.8 seconds – quicker than the fastest McLaren.  Not bad for a family hatch back!